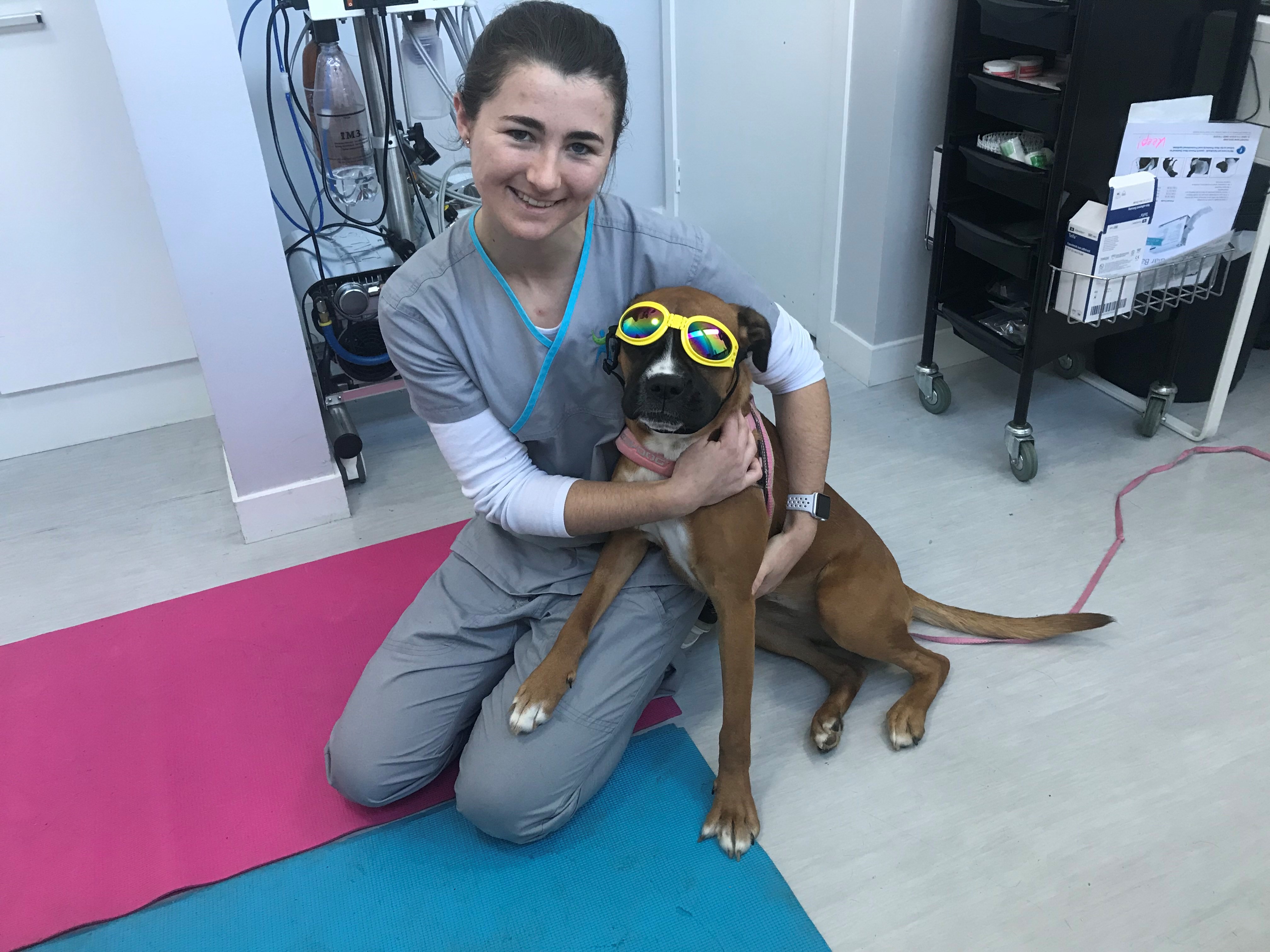 Caudal cruciate ligament – a rare injury in a dog!

We’ve had recently lovely Boxer Lady Ella for a visit and diagnosed that her caudal cruciate ligament was ruptured. Ella is a beautiful Boxer pup with extremely good manners.

But before you will learn about her incredible recovery we would like to give you a short introduction into the world of cruciate ligaments. Well as short as it can be.. Cruciate means ‘cross over’ or ‘form a cross’ and the cruciate ligaments are two bands of fibrous tissue located within each knee joint. They join the femur and tibia (the bones above and below the knee joint) together so that the knee works as a hinged joint. The two cruciate ligaments within the dog’s knee are called the cranial and the caudal (anterior and posterior in humans – but essentially the same).

In general, a medical management of a caudal cruciate ligament rupture can be an option, but only in small dogs or cats that live more inactive. For larger and / or more active dogs a surgical repair is strongly recommended, but a CaCL is not helped by a TPLO or TTA. To stabilize the joint with a CaCL injury surgeons use other techniques like placing sutures outside the joint capsule on either side of the knee or redirecting the medial collateral ligament with help of screws.

Thanks to the skills of our orthopedic team and the team of Total Veterinary Physiotherapy, as well as Ella’s owners Ella made a remarkable recovery.

The caudal crucial ligaments were replaced with suture material, Ella had regularly physio and Ella’s Mum and Dad have been role models in keeping Ella confined.  Ella was back to be her bouncy self within a few weeks after her surgery.  Go Ella!!

We are open from 7.30 am to 6:00 pm on weekdays, and from 9 am to 12 pm on Saturday mornings. We do consultations by appointment only. You can either book an appointment by phoning us under (09) 281 3 481 or by contacting us via our contact form below.

Once we receive your request, we will contact you to confirm a date and time that is convenient for you and make sure that you are informed of any special appointment instructions.
This form should only be used for requesting appointments that will take place at least 2 full business days after the time of the submission of this form. If your appointment has not been confirmed within 24 hours, please feel free to contact Ellerslie Veterinary Clinic by phone (09) 281 3 481.

We ask that new clients arrive 15 minutes early to allow sufficient time to fill out the new client and patient forms or you can access and print our New Client Form and bring it with you to your visit. In general, arriving a few minutes early will help us to streamline the check-in process and allows you to take full advantage of your time with the veterinarian.

Our appointments are normally right on time. Although we do have contingencies for emergencies, there will be times where the unexpected will create delays. We will ensure these are minimised. If you have an appointment and are unable to keep it, we ask that you notify us 24 hours in advance to allow us to schedule other patients in need of attention.